1 : Added game starting intro.
2 : Change some room layout to make it more interesting for room chase.
3 : New saiko behaviour to block player and try to steal key in room chase.
4 : New saiko behaviour where she can get piss of block the door and demands to give the key if you are holding one if you dont she will get more aggressive.
5 : New saiko behaviour where she would knock you down and drag you to the room and lock you in it and you need to find the key in the room with low vision while she is counting.
6 : saiko can jupm behind player and grab them from behind slowing them down can also stab if she is annoyed in the same pose.
7 : saiko can do ambush even more and more stealthy.
8 : UI related changes with a new menu screen.
9 : if she detects you are cornered she might give you a chance to escape her.
10 : easy and practice mode added.
11 : some balance changes for difficulty level normal.
12 : Can do fake attack to scare player.

Bug fixes:
1 : fixed bug of camera wobbling in stab death animation.
2 : fixed dead body glitch where you can get stuck.
3 : fixed glitch where once she break the glass she will not move back to stalk positioj instead wills talk fromt he same pos.
4 :  fixing room a3 and c3 stand behind door behaviour she doesnt kick.

Get Saiko no Sutoka

I'm Gonna Kick Her Ass In There

and how to download the old version of the game

Hi, thanks for creating this great game.
I want to show you an errta although you may already know about it and i know it's very trivial. 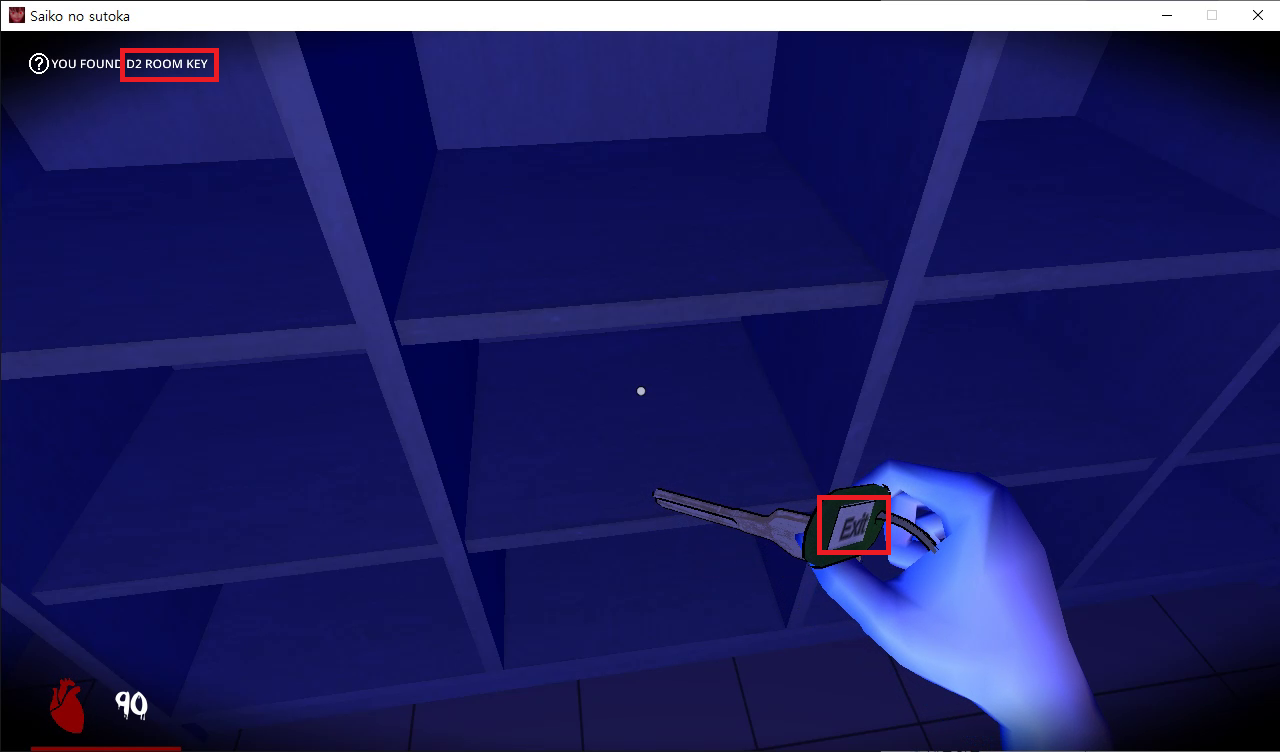 When the stolen exit key is picked up, the status message says that you found D2 room key.

the mouth was a little too jarring to look at in the intro BUT I LOVE WHAT ALL YOU HAVE ADDED. I was just wondering if you could lip-sync the intro better, and not make it look like her mouth has a bird's beak look to it. 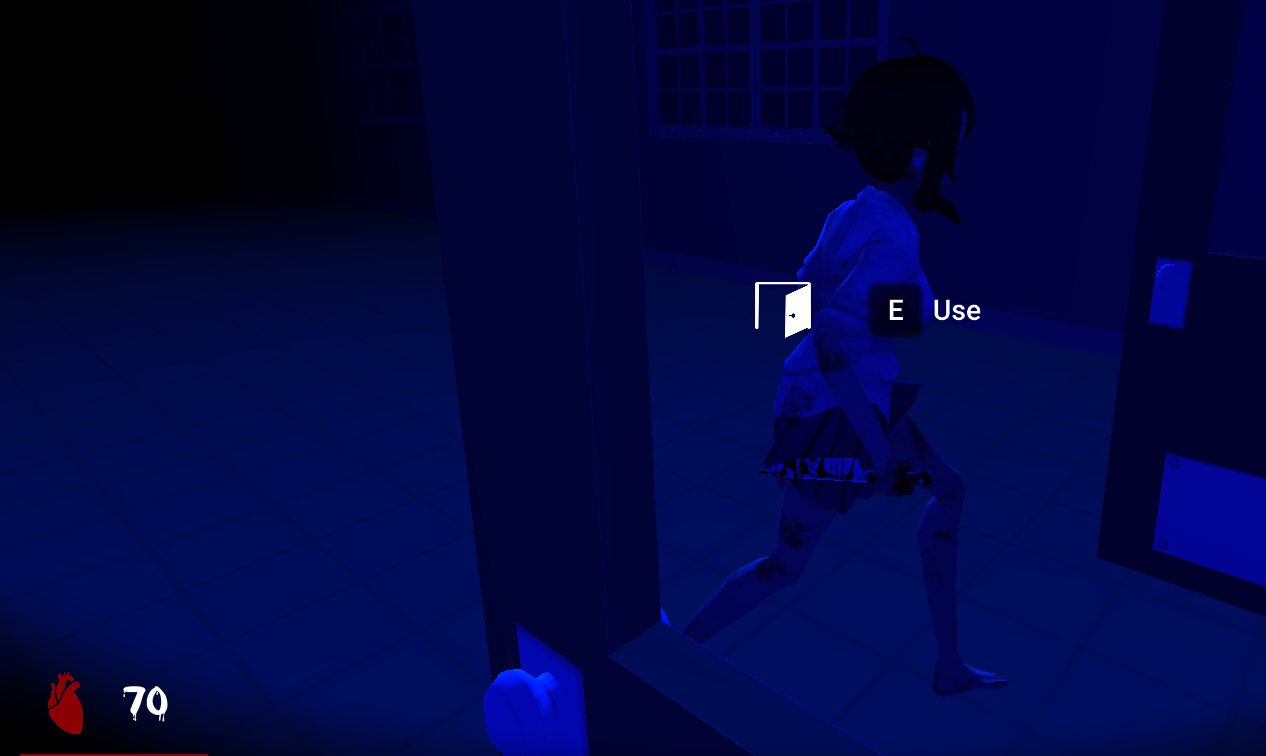 edit: Beat HARD MODE too can't wait til next update.

Is normal hard? My scary ass only clicked at practice XD

It took me like 2 and a half hours to beat it but I was also still learning mechanics and stuff. This game is so cool I also beat HARD MODE. I can't wait for the next update.

My only problem is why  does she just pop out of nowhere and HOW THE FUCK DID SHE JUST THROW A HEAD AT ME .SHE'S A FUCKEN AMATEUR

The wait was killing me, but it is finally here:

- Intro and new menu animation is awesome, i love it, but the animation needs some polishing though. Saiko's model could use better facial rig as well, but for now it does its job.

- Room layout changes are good, this makes juking Saiko harder. This could maybe be randomized like Dead by Daylight tiles and scale with difficulty.

- I'm not sure what this feature is "New saiko behaviour to block player and try to steal key in room chase.", i assume it's the one where she dashes between desks. This looks good, but from what i've experienced, she doesn't try to steal your key. Saiko will jump from desk to desk in order to block your way out. I like this feature but it need more depth, for now you can get close enough to her and she will start following you normally again. Also, she won't attempt to get close to the player, but rather block his way out.

- Saiko blocking the door and asking for the key is nice, although the tradeoff for not giving her the key should be more punishing.

- New knockout and finding key in room mechanic is very good, although when you figure out how it triggers you can easily avoid it.

- I really like piggyback mechanic, but it could use some improvements. For example, i had no idea what was going on the first time it happened since you need to look all the way down to see a tiny bit of the knife.

- Saiko ambushes more for sure which is good. I didn't think she could ever grab me by surprise but it happened a couple of times. Ambushing need more depth, for now she mostly waits outside of classrooms and electrical, the middle part of the map could be a really bad spot for player if she decides to hide and wait there. Also you can safely avoid getting ambushed if you close or open the door of the room you're in, even if you're not sure she's waiting for you.

- Saiko can spare you if you're cornered, as far as i know it doesn't trigger on hard which is a shame, but at the same time you're rarely gonna get cornered in the first place (if you know what you're doing).

- Easy and practice are nice additions, this will make the game more accessible for everyone.

- Fake attack scared the fuck out of me, i never read patch notes before playing so that one was a clever scare. Good addition. She says that she would never hurt you while doing this, but never ends her sentence because she starts laughing. Maybe add a specific animation for feinted attacks so that it doesn't occur.

Not sure what features are planned for 2.0, but i would say polishing the current version would be a nice step forward.

Adding an options menu would be nice, for example a toggle on/off bloom, graphics quality, key bindings and so on (key binding would be really helpful for left hand users or anybody in french speaking countries with AZERTY keyboards).

There are still some issues with AI doing some crazy thing like running away from you to smash a window that is on the other side of the hall, getting stuck on objects or not following you properly.

In terms of difficulty, Saiko needs to be more hectic/unpredictable. This would make her more of a threat. For example, vaulting over desks timing shouldn't be predictable or else the player could use it to his advantage.

Other than that, we have yet again a great update, i hope to see more.

Hello!! So i recently just played the update, and i have a few things! So, i really loooove the intro i love the camera angles in it it's such a serious tension. I love the beginning of the game with Saiko speaking to the player, which i would absolutely love more of Saiko speaking to the player. I could pretty much see a bit of a beginning in a possible story line there lol. The things that i have a issue in, i like the idea of a fake attack, however; Saiko does this too much, it gets annoying, and you kind of feel like she really isn't gonna do anything to you, DEPENDING on how many times she fake attacks. For me, she's done it everytime i have come into contact with her. I overall really love the game, i'm the biggest fan here. i got your girl on my shirt lol. But yeah, so i would really love looking forward to more openings such as this new one, and less of fake attacks XD Anyways, thank you so much for hearing me out!!

love the new update it rly cool to see these new  behaviours.the thing that got me to smile is when i tried to run but i couldnt i tought it was a bug then i looked down adn saw her hand around my neck and i was like oh well i guess i will die becose i had like 15 hp .but still love the update and im ok it took u so long to make it it was worth it a lot.

game starting intro It was not translated

alpha 1.9 hotpatch
1 : fixed she some times geting off player makes her float in the air. (done)
2 : fix issue where if she can find path and go all the way back to another room point through wall.(done)
3 : some chair are still climbable. (done)
4 : intro some times get stuck and doesnt move forward on slow systems. (done)
5 : can pick up key in dieing and push down moments. (done)

I think I found a bug. I was playing with the new key stealing and mercy mechanics when I encountered it. First she demanded the key at the door, which I responded by hiding in the corner of the room. She got angry and pursued me. She then demanded the key a second time after seeing that I was cornered. This time I gave it to her, however, she stayed in place with the key in her hand. After I observed her for like twenty seconds, to see if she would do anything, I tried to leave the room. She then went through with her new game in the dark where I am at now. I can rotate the camera in a circle but beyond that, nothing. There are wet footsteps that can be heard like every three seconds or so.

Thought I'd let you know. Beyond this and a few other weird behaviors with the mercy system, the update has been really good. I like all of the new additions. 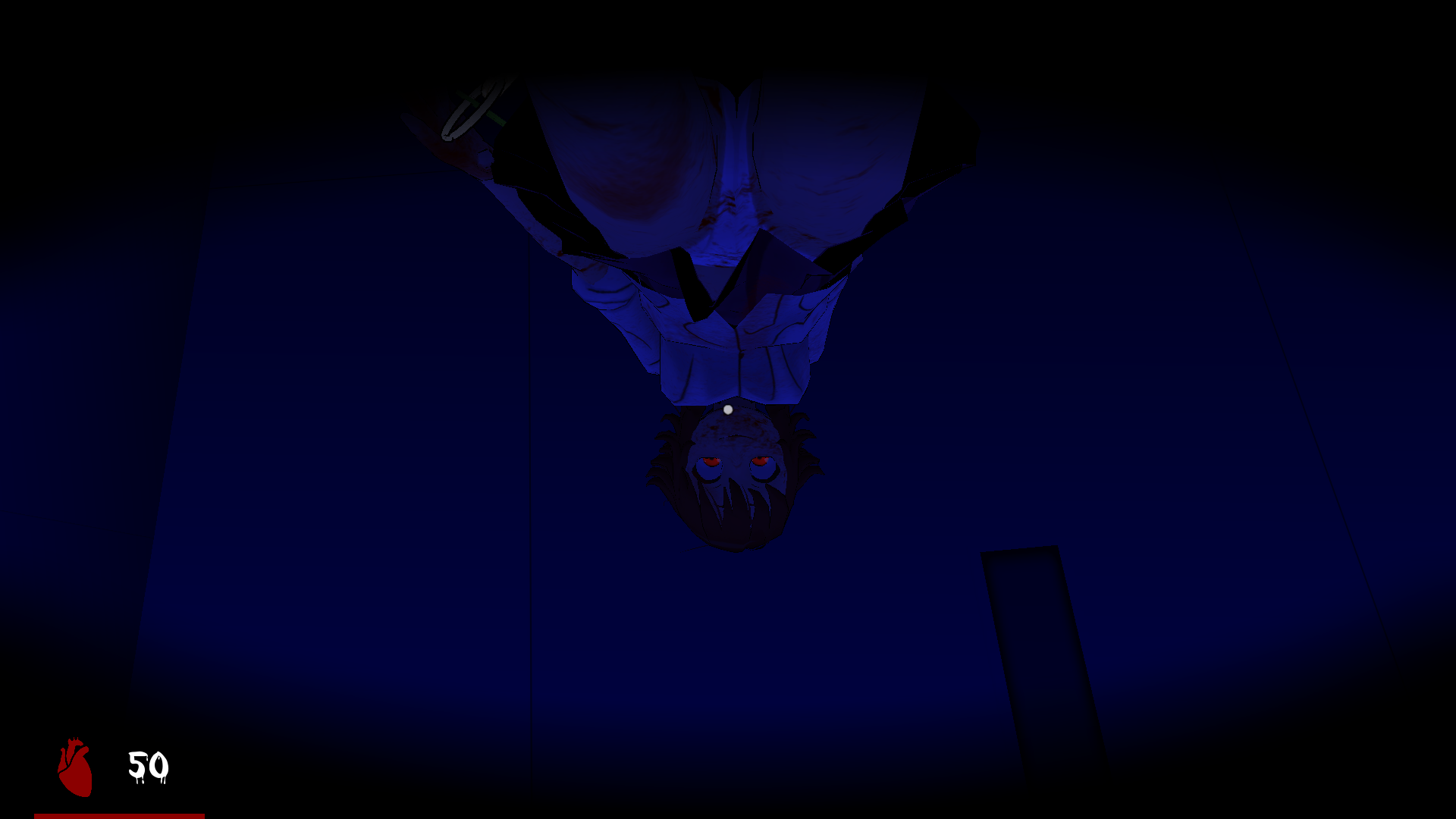 Thanks for notifying about the bug i will note it down and fix it in 1.9.1

Definitely like the update. I don't think she likes me though. I've died like five times in practice mode. I either get my throat slit or my neck snapped. Of course, I get cut when I push her around after she spares me. She also always seems to break my neck if she catches me while crouched. Wonder if that is on purpose. Haven't seen any of the other stuff yet, except her interaction with desks.

Can't wait to check it out, the update seems to be awesome! Gonna record a vid about it tomorrow and write you my as detailed as possible feedback as usual!